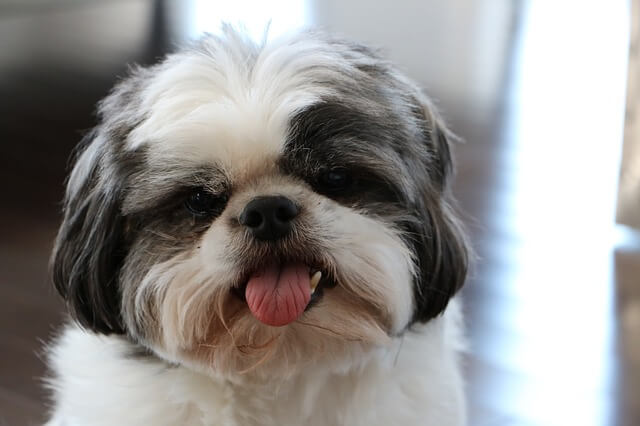 Written by The Best of Breeds

The idea of a litter of tiny Shih Tzu puppies is an adorable idea but a bitch will have to go through the pregnancy and birth before you can start enjoying the adorableness.

In this article we will look at things that you should know about pregnancy in Shih Tzus.

How Many Puppies Does Shih Tzus Have?

It is normal for this breed to have a smaller litter during their first time, but as they grow older, they produce larger litters. There is also no exact number of how many puppies they will produce every time they get pregnant cause they can give birth to 1, 2 puppies, or even more.

Due to their size, Shih Tzus will also have fewer litters during their lifetime compared to larger dog breeds.

When Is The Best Time For A Shih Tzu To Get Pregnant?

Shih Tzus can go into heat as early as four months, though most Shih Tzus go into heat between 6 to 9 months. They are still considered a puppy at four months but capable of having puppies at a young age. While some dog owners breed their Shih Tzu’s this early, it is not advised.

The dog may not be an adult herself and may have complications during pregnancy. They are not yet fully grown if they go into heat early and breed too soon.

Her size may not accommodate the growing puppies, leading to a miscarriage or spontaneous abortion of the fetuses.

Experts agree you should wait for the second or third heat cycle before you mate them with another.

As mentioned above, while it is possible for a Shih Tzu to get pregnant very early on, it is not recommended for the health of the dog. Here are a few more issues that may be faced if a Shih Tzu gets pregnant while they’re still young.

A Shih Tzu at such a young age may not have the immunity to fight off infection and diseases as compared to a mature dog. They may still be susceptible to bacteria that may cause birth defects, miscarriages, or stillbirths. Also, when she’s not fully vaccinated, and she has been bred at such a young age, your Shih Tzu may have a condition that can both affect her and the pups in her womb.

A young Shih Tzu may still have an underdeveloped pelvic canal that can be a problem when she needs to give birth cause it may not be big enough for the puppies to fit through, which can lead to the death of the puppies.

If a Shih Tzu has an underdeveloped pelvic canal then it will be necessary for them to have a C-section to deliver the pups. This means that even in this case there is a chance for survival both for the pups and the mother.

Failing To Care For The Pups

Shih Tzus that have pups at too young of an age have a tendency to abandon their pups and not provide them the necessary care after giving birth. The dog will be more interested in resuming their usual activity since they are still a puppy at four to six months.

This lack of care from the mother can lower the chances of survival as compared to a Shih Tzu who gave birth at the right age.

How Long Does It Take For A Shih Tzu To Get Pregnant?

Once the Shih Tzu is in the Estrus stage and shows interest in male dogs, they are biologically ready to mate. They will show signs such as holding their tail to the side, arching her back as if raising her vulva and hind legs for the male. She may even initiate the humping as if inviting the dog to hump her as well.

When you place your Shih Tzu and their mate together or allow them to find out the process by themselves, they will mate.

While your Shih Tzu may get pregnant after their first mating, it may take multiple attempts. Although there are ways to detect if your Shih Tzu is pregnant, it may not be possible to get an accurate answer until after three to four weeks. Palpation is one way to check the dog’s pregnancy, which is where you check for swelling of the Shih Tzu’s uterus, which may indicate that they are pregnant.

Another way is by using Abdominal Ultrasound as early as three weeks. It is also possible to estimate the number of puppies, but it is not completely accurate.

They may use an Abdominal Radiograph during the last two weeks of pregnancy to determine the number of pups. This is advised by vets so owners will know when their Shih Tzus have given birth to the last pup or if more pups are remaining inside the womb.

A blood test helps check a hormone called relaxin. It is detected in the pregnant Shih Tzu as early as 22 to 27 days after mating. It will remain high in the blood and will decrease after the birth of the puppies.

How Many Times Can A Shih Tzu Get Pregnant In A Year?

A Shih Tzu can get pregnant twice a year, but this is not encouraged for health reasons. They need time to recover otherwise it is likely that they will have health issues.

When a Shih Tzu gives birth via C-section it is even more important that they are given time to recover between pregnancy as they need to recover from the surgery as well as the changes their body went through during pregnancy.

Your veterinarian can evaluate the health of your Shih Tzu if you want to breed them after the first pregnancy. The vet will advise you whether your female dog can carry the pups and get pregnant the second time.

Also, you cannot tell just by looking at your Shih Tzu if she’s healthy to carry another set of puppies. The best way is to have them checked by the vet.

How Long Is A Shih Tzu Pregnant For?

The average length of pregnancy for a Shih Tzu is 57 to 63 days.

Delivery is expected when the dam’s temperature drops. You should start checking her temperature as early as 57 days and take it twice daily starting on the 60th day. Once the temperature drops below hundred degrees Fahrenheit, contractions will start within 24 hours.

Other signs you need to pay attention to when your Shih Tzu is about to go into labor are the following.

How Long Is A Shih Tzu In Labor For?

Shih Tzus will normally go into labor for 2 hours, this only accounts for the part of the delivery where the bitch is giving birth.

The first stage of labor can last for 6 hours up to 12 hours, and in some dogs, it can last longer. It is when your Shih Tzu manifests nesting behavior, panting, pacing, and restlessness. This is when your Shih Tzu is preparing themselves and their environment for giving birth. At the end of this stage, it is expected for your Shih Tzu’s cervix to fully dilate.

The second stage of labor is where the puppy is delivered. The completion time varies and will depend on how fast they give birth to the pups and how many puppies are there, however it is normally around two hours.

You will find your dog’s abdomen contracting, and there is obvious straining as your dog tries to deliver the puppy. It will not be successful with the first try but will be after an hour or two. You will see the appearance of an apparent ball-like shape protruding from your Shih Tzu’s vulva. The mother will strain again to deliver the puppy fully.

Stage three is when the placenta is expelled. It is also a crucial stage cause all placentas must be removed, or its retention will be dangerous for your Shih Tzu.

It will depend if the dam is having a hard time giving birth or labor, for hours expelling no puppy. It is also possible to deliver a puppy and then have difficulty giving birth to the rest of the pups. It can be critical to the dam and the puppies as it can cause dehydration.

A C-section also occurs if the dog does not strain or if the dam has no more energy left to push the puppies out. It is often an emergency if this happens cause there is a need for intervention by the vet.

Here are other reasons a C-section is performed in Shih Tzu.

C-section will cost you, and you need to prepare when this happens to your Shih Tzu. You can’t also predict when complications arise during the birthing process, so you should be ready.

Some extra measures may be taken while the dam is pregnant, and this is by taking her for checkups during her pregnancy. It will ensure that her health and her pups are checked and monitored throughout the pregnancy.

It is recommended that you have your vet’s emergency contact details easily available in case your Shih Tzu is having complications in the early hours.

Her diet is monitored, and an increase in weight or changes in her health will be detected early.

How Much Should Shih Tzu Eat During Pregnancy?

During the first six weeks of pregnancy, and if you are already providing your Shih Tzu with a well-balanced diet, there is no need to add more. Not even vitamins or other mineral supplements. It is possible to add such if the vet advised it. Some supplements may even cause harm instead of benefiting your dog.

After the sixth week of pregnancy, it is allowed to increase the food intake of your Shih Tzu. It should include a high-energy diet and more on low fiber feeding. Premium diets may be advised by the vet and bought in most animal hospitals.

In the last three weeks of pregnancy, feeding frequent yet smaller portions of the meal is ideal, and supplements or medication are given as prescribed.

You should not supplement your Shih Tzu’s diet with extra calcium, either through a change of diet or through calcium supplements without checking with the vet. Adding calcium to a Shih Tzu’s diet has been linked to a number of health conditions.

Shih Tzus are a breed that suffers from an underbite, this can impact your Shih Tzu from eating and is a hereditary trait.

At What Age Should You Stop Breeding A Shih Tzu?

Shih Tzus are toy dogs, and as such, they should only be bred until they are 5-years old. Although it is certainly possible to keep breeding them until later in their life, with some being able to carry on until they’re 8-years old, it will get harder on your Shih Tzus body as they get older.

Consulting with the vet is necessary when breeding your Shih Tzu when they are over 5-years old, this is to check their overall health and whether they can still successfully carry the puppy until birth. This is even more important if your dog had any previous complicated pregnancies. The complications may be an indication that issues may arise in future pregnancies.

Another reason that you may wish to consider stopping breeding your Shih Tzu is if they have started to show symptoms of genetic conditions. This could include medical conditions such as hip dysplasia, diabetes, or any congenital issues that may be passed on to their puppies.

Newly born puppies can be an exciting time for both Shih Tzus and their owners. While the vast majority of Shih Tzus will go through pregnancy without issue it is worth ensuring that you’re in regular contact with your vet, who will be able to help and guide you should complications arise.